It’s been a long time coming, but Outside Lands 2019 is a landmark inflection point in mainstream cannabis. In a surprise announcement just days before festivities officially began in San Francisco’s historic Golden Gate Park, the festival announced that Grass Lands, the cannabis-themed experience launched the year previous, had been officially permitted to allow for the on-site sale and consumption of cannabis. A fact acknowledged by Donald Glover himself to throngs of screaming fans during his headline Saturday set as Childish Gambino. Paired with an all-star lineup featuring the likes of Flume, Kygo, Kacey Musgraves, Anderson Paak and the legendary Paul Simon, the festival easily smashed its previous attendance record. 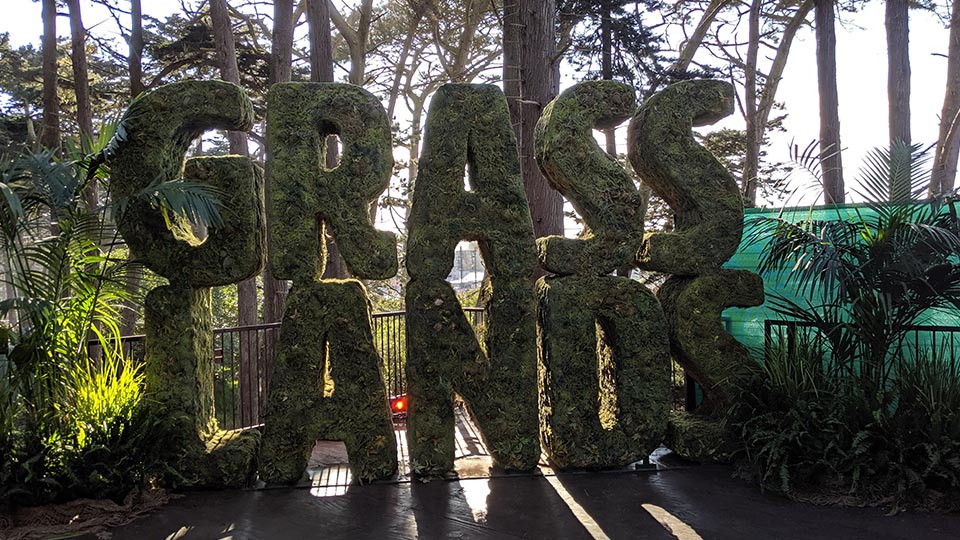 According to Blaze, the company in charge of inventory and point of sale for Grass Lands, they didn’t get the go-ahead to bring any physical product until 5am Friday morning, mere hours before the first of the weekends 200,000 attendees flooded in. Thankfully, short of a few malfunctioning registers quickly patched up by on-site Blaze staff, the whole ordeal went off without a hitch.

From the eastern entrance Grass Lands is directly accessible from the central crossroads that connect the Polo Field, Lindley Meadows and Hellman’s Hollow, the sections of the park that host the festival’s biggest stages for the weekend. After a quick wristband check to ensure you’re over 21, a flight of stairs leads you to the top of a shady wooded incline the festival transformed into a cannabis wonderland. 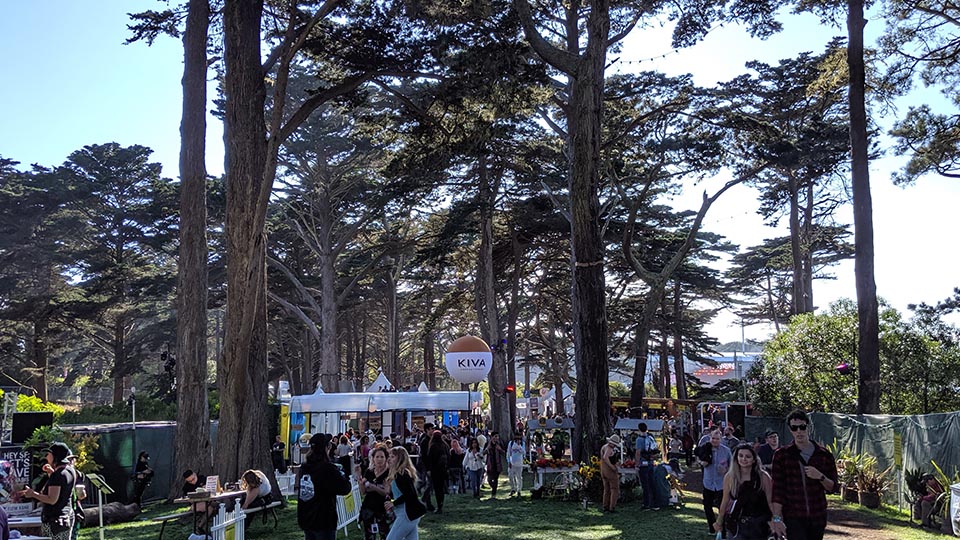 Immediately, you’re greeted with the largest structure in the area, a wooden outpost emblazoned with “Budtender”, stocked with available products from the almost 30 brands present.  They had everything from flower and pre-rolls to Kiva edibles, Lagunitas drinks, and Sublime ice pops – all medicated of course. Pricing was also exceedingly reasonable with most prices reflecting the same dollar amounts you’d see at any legal dispensary. The area was larger even than its alcohol-themed counterparts in Wine Lands or Beer Lands, featured unique buildouts like a PAX station with free laser engraving for their Era pens, a Flow Kana fruit carving competition, and a retro Moxie “gas station” for smoking concentrates. Grass Lands also brought in some hometown dispensaries like Flower To The People, the Green Door, Lady Chatterley Delivery, and the Posh Green Collective. The latter owned by Reese Benton, the first African American woman to be a sole owner of California dispensary, even despite staunch pressure to partner out. Notably there were also three designated consumption areas with picnic tables, a stage for live music, a terpene wall and a community mural with paint supplies available for all to use. 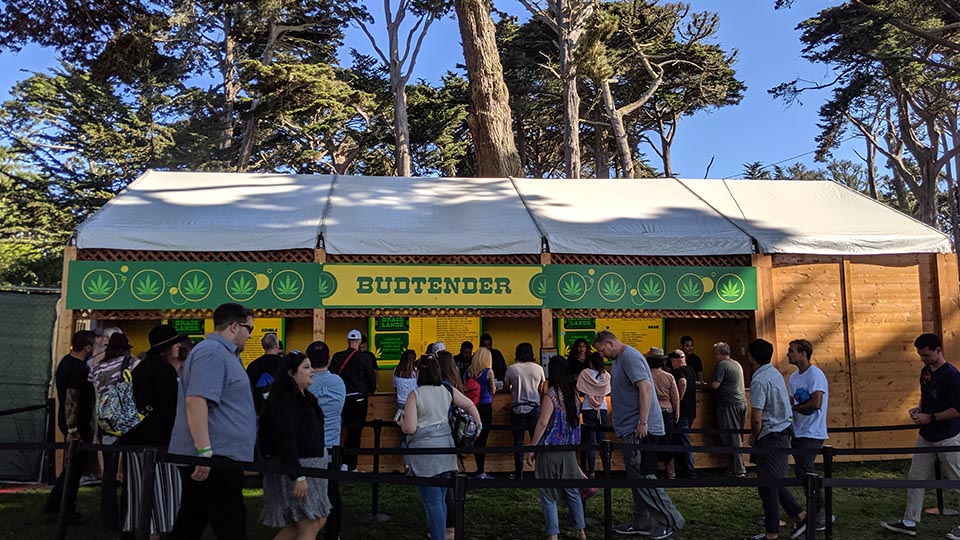 Rules surrounding cannabis use in other parts of the festival were what you might call, willfully hazy, and thankfully non-hostile. Security on entering the festival officially allowed paraphernalia if it wasn’t glass but did not allow any product or plant matter. This means you could bring your vaporizer batteries, rubber pipes, papers and lighters, but not cartridges or flower. Technically, actual consumption of cannabis was to be limited to the designated consumption areas provided inside the 21+ Grass Lands. That said, other than a few people having their visible personal product confiscated at the front gate, most of the festival was cannabis-friendly with little to no instances of harassment from security.

In fact, Grass Lands was often the most pleasant part of the festival grounds during the hectic weekend, particularly on the jam-packed Saturday. You could stock up at Grass Lands and catch some literal flying creampuffs from Bon Appetit’s show and still have time to rock out to the headliners. It’s one of the most well-shaded parts of the park making it one of the more comfortable places to be during the swelter of the day. Not to mention that Sublime was handing out free non-medicated ice pop samples and Lagunitas’ ice-cold medicated THC beer was cheaper than every actual beer available at the festival. (I use the term “beer” loosely here, it’s sparkling water like an infused La Croix) The non-central location of Grass Lands combined with the +21 filter at the entrances also made it one of the least crowded places to be. Maybe you can chalk it up to the mellow effect of the plant, but Grass Lands was also more consistently free of litter and wasted attendees than the rest of the festival grounds. As a final perk, the second entrance/exit at the bottom of the hill leads straight to the south tunnel of the Polo Fields. This means that it’s perfectly situated for people to enter, have their fill, and exit almost directly into the front row of Land’s End, the grandest of Outside Lands’ stages, featuring the biggest headliners of the weekend, all without having to traverse the most heavily trafficked areas of the grounds. 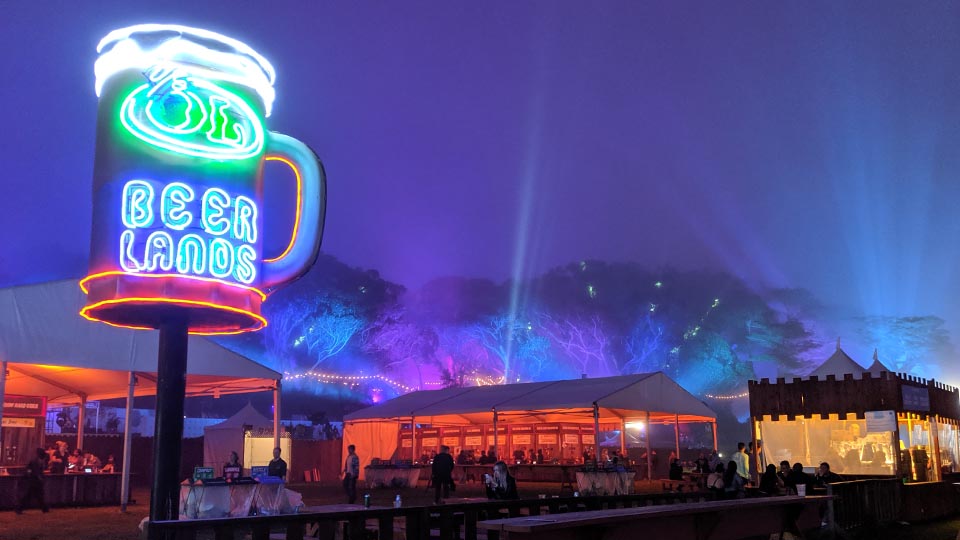 This new-and-improved Grass Lands seems an obvious next step, particularly in the metropolitan center of one of the most historically cannabis-friendly states in the US. But, if the 70’s were any indication, mainstream cannabis is far from a fait accompli; the pendulum of public opinion is fickle, and can swing back at any time. Compounding this, the past few years of the Californian cannabis industry has often felt like an absurd, bureaucratic Rube Goldberg of regulations and unintentional effects, as we realize that legalizing the plant is merely the door to a myriad of practical dilemmas that cover everything from marketing and packaging, to taxes, licenses and local politics. So, while technically Grass Lands debuted last year at Outside Lands 2018, as a dry run without a permit for sale and use, its inclusion was an anti-climax that felt like the ellipses of a sentence we might never see the end of. 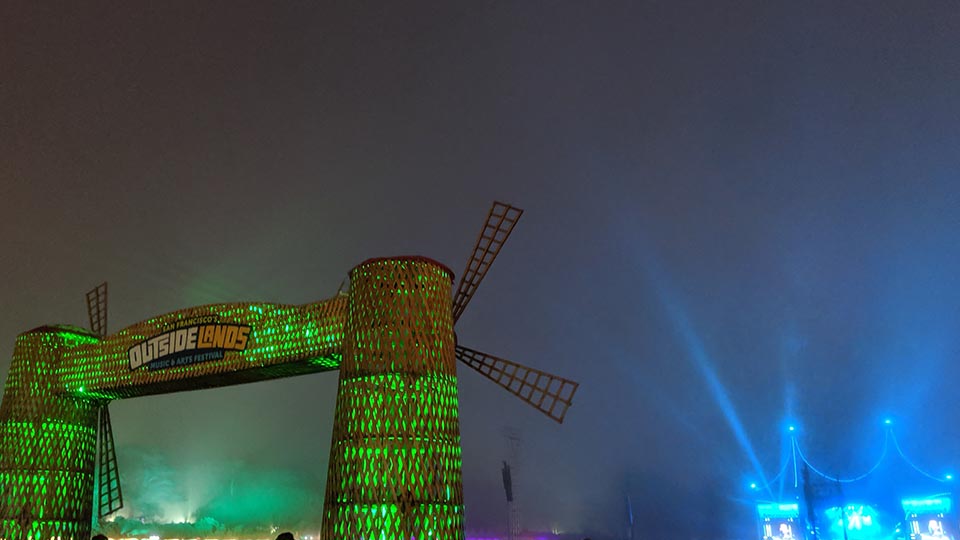 Although cannabis-centered festivals that permit sale and consumption have existed and continue to thrive today, Outside Lands makes it’s stamp as the first big name, multi-genre festival (a coveted category that includes the likes of Coachella, Lollapalooza and Bonnaroo) to allow it. Up until this point, cannabis has existed at these festivals in a superposition – all official regulations and law enforcement explicitly prohibited its presence, but it’s ubiquity beyond the security checks was a well-known, if unspoken, fact of the festival experience. The history of music festivals is inseparable from that of cannabis’, beginning with the cannabis “protestivals” of old where consumption was used form of political resistance. The festival industry looks very different now under the all-recording eye of social media and the experiential culture of millennials and Gen Z, but they’ve always remained celebrations of the future. Grass Lands represents a bridging of this final gap, calling back to the original roots of the industry to break barriers and treat it’s attendees like guests rather than criminals. Reports from last years Grass Lands noted an exponential jump in production for this years blowout, so one can only imagine what they have in store for 2020.