The redemptive value of cannabis, according to Jim Belushi

The redemptive value of cannabis, according to Jim Belushi

Celebrities develop new business ventures all the time. The rich stay rich, as they say. But rarely do those investments ever come from a place of such personal attachment as Jim Belushi’s foray into the cannabis sector. The heralded actor has created Belushi’s Farm, a premium cultivator and brand of high-quality, Oregon-grown flower.

Belushi’s introduction to cannabis is the same as most of us: teenagers in the middle of nowhere, hoping to try something new and interesting they heard rumors about from mythical California. But his lasting relationship is a little different than most.

“Captain Jack is the smell of SNL,” the former castmember says. While the particular strain may have died out of the trade decades ago, Belushi’s Farm – Jim’s company – has dedicatedly cultivated it back into the market.

Belushi initially bought the Elks Picnic Grounds in Eagle Point, Oregon, a small town in the shadow of Mt. Mazama’s Crater Lake and about a four-hour drive south of Portland.

He repaired the picnic grounds and built a house on his idyllic river-front property where he can walk a hundred steps out his backdoor onto a bend of the Rogue River and cast a fly or two. When the farm behind him opened up, he decided it was time to add another title to the list. This time, it’s cannabis cultivator. 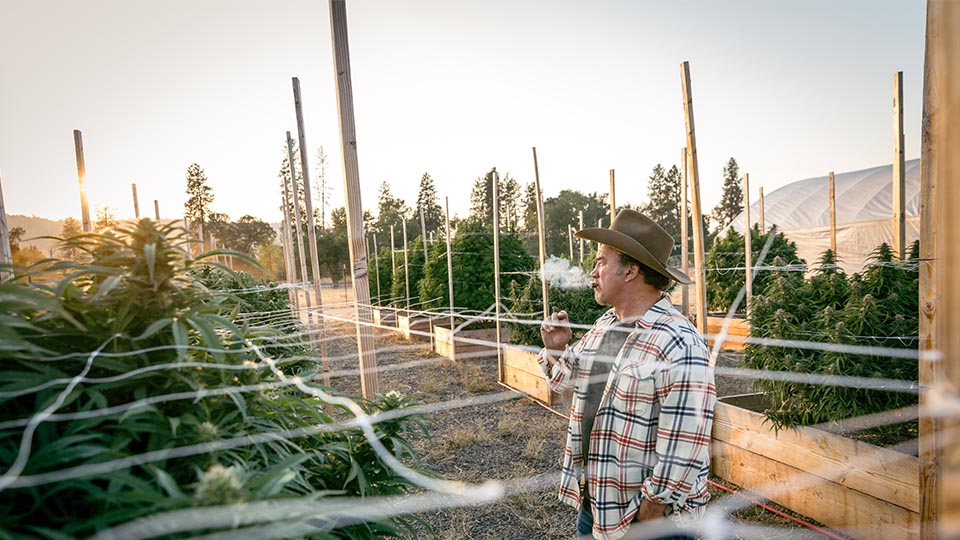 Belushi’s Farm was then born on 93 acres of Oregon soil.

But Jim’s relationship with cannabis isn’t just recreational and business. After dealing with the aftermath of his brother John’s passing, Belushi became all too familiar with trauma and the windy, treacherous road out from under it.

He’s pointed to how many of his peers, parents, and the generations before had relied on sedatives such as alcohol (or opiates) when dealing with trauma. How veterans have come forward to tell him how much the cannabis he cultivates helps them in their wars against PTSD.

As he told Leafly, “I believe if we knew what we know about medicine today—about marijuana today as a medicine—back in the ‘70s, there’d be a lot more people alive, including my brother John.”

So Jim has been working with the Oregon Liquor Control Commission (the governing body that also handles cannabis) to try to establish a buyback program for anyone hoping to curb their opiate addiction with the help of cannabis. By, hopefully, setting up nonprofit charity popups where anyone with opiates can turn them into pharmacists or law enforcement officers and, in exchange, get the cannabis they may need.

The conversation about whether cannabis can be used to treat opiate dependency goes back centuries and isn’t anything new to the overall vernacular we see here.

But what is new is Jim Belushi’s voice, idealism, and his belief that everyone experiencing trauma should have the ability to access clean, safe, and quality cannabis to help cope. As CNN published that studies have shown CBD can aid with opiate addiction, hopefully government agencies can start to realize that maybe, according to Jim, there might be something here worth fighting for.